This week, speaking at the Royal Television Society, BBC Director-General Mark Thompson defined the Corporation’s recent successes and its future in an increasingly “digitally fragmented” world.

The DG reflected on his eight year term: the highs (a renaissance for specialist factual and drama, and impressive growth in digital strategy and BBC Worldwide revenues); the lows (not limited to the “trust” crisis of ‘The Queen’ and competitions, and the Russell Brand affair); and the dark threats of 2012 (wider economic crisis and international threats to journalistic integrity and voice). And to those who foretold the death of the BBC, he had a strong message: the BBC is “not just surviving but thriving”.

The DG reported that the BBC reaches 96% of the UK population every week, with average weekly consumption at 18-19 hours. Despite deep CSR cuts to the World Service’s budget, global audiences are bigger than ever been, turnover as a whole has doubled since 2004, and profits have quadrupled. He claimed that “support for the licence fee is higher today than in the 1980s”, the British public seeing the BBC as “an indispensible public service”. And he believes the Corporation has seen off (at least for now) a series of critical threats – such as the burden of over-75 TV licence fees.

Next up, 2012 will see “a dramatic leap forward in digital capability”. Central to this is an ‘iPlayer 2.0’ called Project Barcelona. The DG claims: “the iPlayer is the most successful and most intensively used catch-up service in the world” and, perhaps unsurprisingly, now wants to monetise its success. The idea behind Barcelona is simple: after the 30-day iPlayer window closes, another non-exclusive paid download-to-own window would open. (A range of media channels reported this announcement as “the BBC plans iTunes competitor”. The clue is in the word ‘non-exclusive’).

Some independent producers are skeptical, worried about the impact on DVD sales and unsure of what revenue share they will receive. However, at the moment, only 7% of BBC content is available for producers to license to iTunes or other download-to-own services, or sold through BBC Worldwide. Thompson was not specific about the timescale or pricing, but sources said programmes could be available to buy at the same time as they go on the iPlayer, with early speculation putting the price at £1.89 a show. And the BBC service is expected to give producers a greater share of the episode download price (around 40p from £1.89) than Apple currently does (28p on the same price). Over time, the ambition is to open up and monetise the BBC’s impressive archive. So it seems Barcelona would be good news for the majority of producers.

Anticipating criticism that viewers were being made to pay twice for content, Thompson said: “This is not a second licence-fee by stealth…it’s the exact analogy of going to the high-street to buy a DVD”. However, as other UK broadcasters extend their catch-up services (Channel 4 announcing 4seven this week) and facing competition from comparably cheap unlimited streaming services like Netflix, he may have to work harder to win that argument at home. 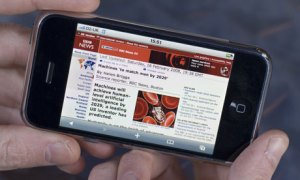 The DG stated: “Freeview, Freesat, DAB, Youview, iPlayer, Radioplayer and Barcelona are all part of one strategy and one big idea – which is that free access to high quality content matters more now than ever and that the BBC must constantly seek new ways of keeping that door open”.

The BBC appears in good digital heath then. But there is a dark cloud on the DG’s horizon: the next Charter in 2016. The same old debate will rage once more – top-slicing, bottom-slicing, the end of the licence-fee – but Thompson believes the BBC has shown itself to be “as much of an innovator and leader in digital as it has been in analogue…remaining the world’s best and most creative broadcaster”. Whether Barcelona will sustain this remains to be seen. But in the face of digital fragmentation, harnessing the BBC brand behind the download-to-own shop-front of Barcelona could provide the Corporation and its producers a rich seam of income in an era of epic public spending cuts.