This morning’s SXSW session, “The $100bn mobile bullet train called Africa“, revealed the scale and pace of change of all things mobile across the African continent, now the world’s fastest growing telecoms market.

Gareth Knight, from Tech4Africa, and Toby Shapshak, Editor of ‘Stuff’ magazine, began by stating that more people have a cell phone than have access to electricity across Africa. PC (or other computer) penetration is as low as fixed-line penetration. Some 80% of the world’s mobile transactions are now made in East Africa, with 40% of Kenya’s GDP transacted through mobile money (carrier billing).  There was $171bn made in mobile payment transactions in 2012, forecast to be $607bn by 2016. The SIM card is the credit card of Africa.

The vast majority of the population do not have a bank account or credit card, yet there are 700m SIM cards in Africa, nearly all pre-paid, and growing at 20-25% each year. Most are comparatively low-functionality, but Shapshak reminded the audience that every phone in the world (4.2 bn) has SMS functionality, and SMS has a hugely high “open and read” rate – 97% versus 5-20% percent for email – and that this often overlooked mechanism has huge potential for disruption in Africa. High illiteracy is overcome by picture or numerical SMS messaging. And the landscape is changing: in 2015, there are forecast to be 125m smartphones in Africa, driven mainly by significant middle-class population growth.

Examples of mobile services and product ranged from micro-finance and micro-loans, such as M-Pesa, to paid-for social media networks to electricity ordering via text. One example was iCow: mobile phone applications which give diary farmers information on how to better manage their livestock. With agriculture contributing about 25% of Kenya’s GDP, the majority of farmers in Kenya remain small-scale, lacking opportunities and finances for professional advice. The iCow platform has 25,000 users after two years in operation and has seen many farmers more than double their income due to improvements recommended by the app. Another example was Mxit, Africa’s biggest social network and mobile instant messenger network. Although facing fierce competition from user migration to Facebook, Mxit is managing to monetize interactions and content in a way that Facebook still struggles to do, with some 750,000,000 paid-for messages sent every day via the platform. 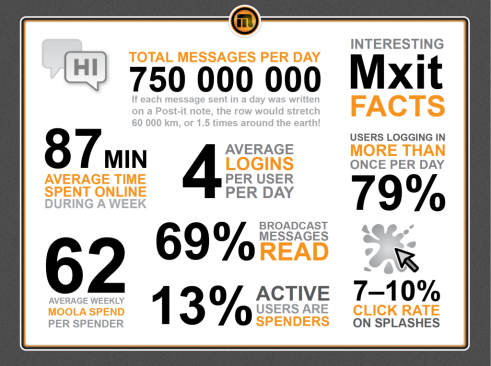 Discussing unemployment and lack of access to education, Shapshak championed an example of Nokia’s web-based MoMaths service, which aims to plug learning gaps in pupils from low-income households, and create new business opportunities in Africa. In 2011, 8,000 South African high-school students racked up a total of 2.5m exercises on MoMaths, with 82% of this activity taking place after school or during the holidays.

Discussing the growth in mobile internet as a utility, Knight and Shapshak touched on the potential of networks like Facebook and Twitter for a range of impacts, from political change to finding employment opportunities, but returned to the realised potential of SMS to have impact now. The session concluded with these statements: Africa has skipped the desktop – have a mobile-first strategy for any product or service launch across the continent; and that the opportunity lies in providing utility value to the 750m and growing SIM cards by solving day-to-day problems that are endemic across Africa, to free up time and energy to become more productive. In short, this brilliant session made crystal clear the social and economic opportunities now for innovation via mobile as the primary, scalable, transactional route to impact, change and value-chains across Africa.

Update: Another notable innovator in this sector is Worldreader, a US and European literacy non-profit whose mission is to make digital books available to children and their families in the developing world. Worldreader has partnered with biNu technology to deliver a smartphone-like eReader experience to low-end feature phones. Worldreader Mobile is currently installed on 4.5 million phones, mostly in Asia and Africa, with 500,000 unique readers consuming 20 million pages per month. The organisation hopes to reach 10 million people by the end of 2013.