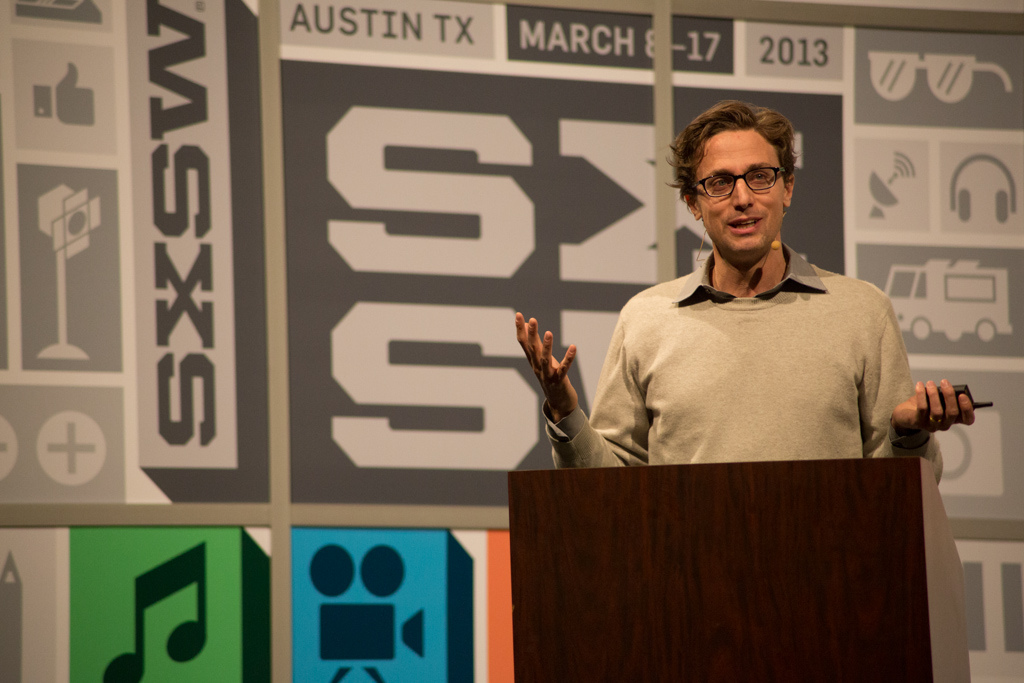 In today’s SXSW session, BuzzFeed’s Founder and CEO Jonah Peretti discussed how to create and distribute content in a world where ‘share’ is the key to success…

BuzzFeed  features “the hottest, most social content on the web” and now boasts 40 million unique views per month. Peretti highlights that we are in the midst of a big shift in media consumption from portals, to search, to social. Facebook, Twitter and the social web are now mature and content spreads faster and further than ever before. This means that owning the printing press or broadcast pipe matters less and less in a world where creating “content people love to share is the key to success”. So Peretti cautioned that you have an idea but also a way to spread it, and this should be a 50:50 effort. But good quality content does not necessary mean that it will go viral, so how do you create content that will spread?

BuzzFeed has multiple mechanics that drive engagement, including “reaction buttons”: one-click actions are easy and low-effort; they reduce some 80% of uninteresting comment posts that are simple expressions of emotion; and once users have reacted to content they are much more likely to share. Peretti then gave insight into BuzzFeed’s “viral rank” (R): the science behind predicting how viral a piece of content might become by measuring by the “social reproduction rate” (i.e. the likelihood people will share, and the size of potential distribution via their social graph). The potential for sharing is impacted by the lifecycle of content on different platforms: Twitter has a ‘R value’ of an hour, Pinterest a week. And the type of content that spreads also depends hugely on the platform: users behave very differently depending on where they are on the web. On Google, the focus is on connecting users with the information that they know they want (i.e. powered by search). On Facebook, the focus is on connecting people with their friends and giving them the means to communicate and express themselves (i.e. powered by social reinforcement and content is the key vehicle to connect). In summary, “Google is the place for content where no one is looking, Facebook is the place for content when everybody is looking”.

Peretti commented that BuzzFeed was founded on social, emotional, shareable content. But as social has matured, the platform has needed to evolve to capture the appetite for long-form content and serious reporting. With core editorial hires and a shift in strategy, BuzzFeed rounded-out its focus across both emotional and informational content to capture the expanding, diversified market for social content. “Scoops and quality reporting now work for social: what gets shared is the newest, quality, summary piece rather than the specialised, aggregated, longer, slower piece of quality journalism”. Traditional media has published in silos (i.e. serious, hard-hitting content only), fearing that mixed content (emotional, light) somehow disqualifies serious content. But Peretti believes that traditional outlets now have no choice as social sharing mixes content types, powered by user’s diverse needs and interests. BuzzFeed has captured the market by making this mixed media available at source.

Peretti reports that this big shift in media consumption is now coming to advertising: social content marketing is now totally pushing out traditional advertising such as banner ads which “do not tell a compelling story”. BuzzFeed’s “story units” have 1-2% CTRs, some 10-times industry average, powered by the platform’s core viral rank. BuzzFeed’s advertisers are now becoming authentically embedded in story unit content, becoming part of the narrative. Interestingly, BuzzFeed charges brands for “seed views” but not for “viral views”, so the powerful social uplift is a bonus as Peretti does not believe in “penalising success”.

Some other lessons from the session: “Social is a way of thinking, not a trick”. Don’t focus on one narrow trick to make content work (e.g. a feature of Facebook) as this is not sustainable and the numbers will collapse. Think integration. Have a heart: emotional intelligence is more relevant in the social space. Content is about identity: people are highly motivated to share content that reflects their lives and experiences. Don’t try to engage everybody: it’s often better to engage a smaller group who care more deeply as people share content that touches their identity. Capture the moment: don’t publish into the void. Be responsive. Not everything has to be funny but humour is a very important way of connecting people to each other on the social web. Nostalgia and human rights are powerful social drivers as it connects people to each other via shared identity or beliefs. 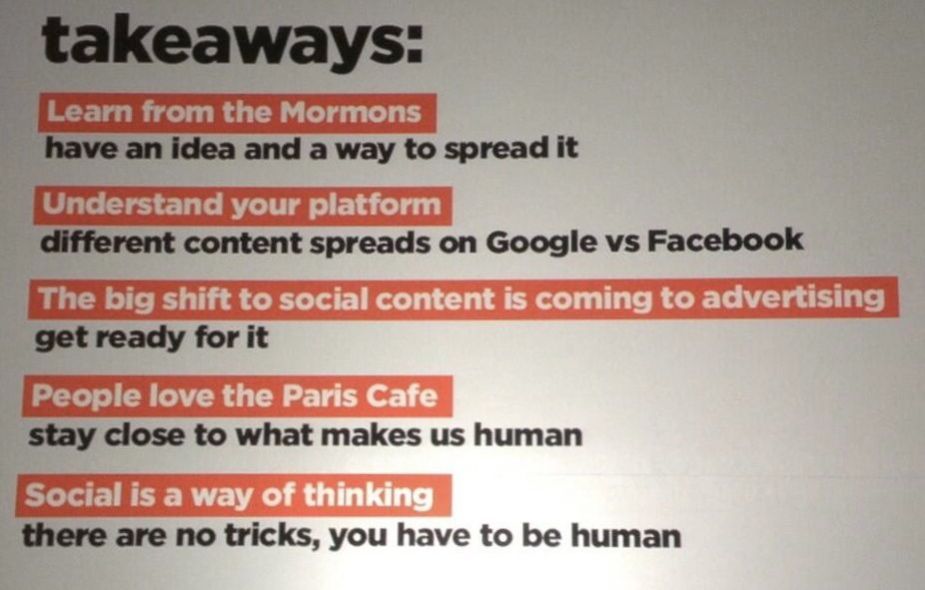